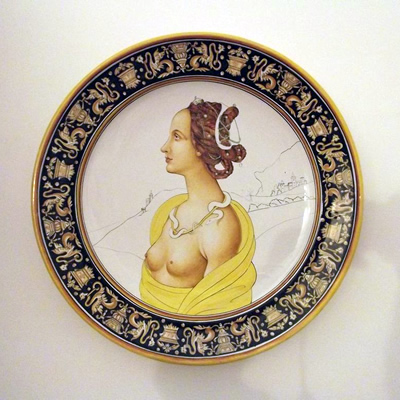 The handcraft of ceramics in Deruta has been attested since 1282 when appears a note on a register in the cathedral of Perugia, about a duty payment made by vases in place of money. The items from this early period are intended for everyday use: pitchers, bowls, vases, with geometric and zoomorphic decorations in two dominant colors: copper green and brown.

From the middle of the fifteenth century, the production becomes richer and varied as in shapes than in the decorations. Feature of the period are the plates called "piatti da pompa" in which have been decorated celebratory images, amorous imagines, hunting and wars scenes, and even crests of arms. Really relevant in this period it's the production of apothecary jars.
At the end of the century, appears a style called "petal back" for the decorations of leaves on the back of the items. In the same time, it spreads the technique of "luster" by Islamic origin, imported from Spain, consists in applying iridescent finishes, obtained through a particular combination of salts with oxides of gold, silver and copper.

In the Renaissance age, the ceramics become also used as ornament. The depictions descends from mythological and allegorical subjects, drawn from the Umbrian school painting masters, like Bernardino di Betto, named “Pinturicchio”, and Pietro Vannucci, called “Perugino”. Many and original decorations appears as floral, grotesque, floral scrolls, peacock feather, crown of thorns and wolf teeth. Meanwhile, the color palette is enriched with orange, blue and yellow.

Between the end of '500 and throughout the seventeenth century it states the "compendiario" style where the painters paid less attention to formal solutions and to study anatomic forms; in the same period we can also find the "istoriato" style, based on the same features of the "compendiario"; an example it's the "ex voto" tiles collection into the Sanctuary of Madonna dei Bagni, located nearby Deruta.
Meanwhile, appears the "calligraphical" style, inspired by moorish design, it consists mainly in naturalistic subjects, bordered by a dark calligraphic symbol around. Originally realized in monochrome ceramic blue on white and then with polychrome color copper green, orange and blue.

In the second half of the nineteenth century the ceramic production of Deruta is in crisis and in the city stay active only few factories. The passion and the commitment of some prominent people of Deruta, the establishment of an art school for the workers training, and even an artistic awards exhibition organized in 1872 by the Municipality of Deruta, contributed to recovery the production of the ceramic art. In the same time it was also organized an exhibition of ancient pottery and probably arose the idea to establish in town a museum of majolica. The idea becomes true in 1898 due to the work of some important citizens such as Francesco Briganti (notary and also major of Deruta), Angelo Micheletti (municipal doctor), and later joined Alpinolo Magnini (art master).